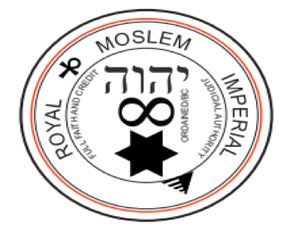 All newly nationalized Moorish-Americans will receive a properly and lawfully notarized seal of their Moorish-American national proclamation declarations, as well as several stock card copies of their proclamation declarations. This product service also includes free packaged public law infromation, as well as all constiutions and treaties related to their newly reaffirmed freedom.

The services offered upon this page are for the national 'sealing' and notarizing of the Moorish-American national proclamation/declaration papers by a certified Moorish-American government official.As a PRIVATE government we do not give authorization for any corporate quasi-national entities or uncertified national of our nation to act in place of our Governement duties of operation. However we assist the people, so Individuals will indeed have to freely proclaim and freely declare themselves in their own appellation, upon their own physical process of initiation - through the downloading and creating of their own declared proclamations.


These services are being offered to the lost-found tribes of North America, by way of royal flesh and blood, through nationals of the Jeep Iroquois Tribe. NO TRIBAL REQUESTS are offered to the public as product or services, nor at any free obtainable measure. Jeep Iroquois Tribal Request Forms may only be inquired through summoning a government official.

An email will be sent to an authorized representative upon request.